In 2018, Nestlé Jamaica Limited, Nestlé Trinidad and Tobago Limited, and Nestlé Caribbean Incorporated merged to reflect the Anglo-Dutch Caribbean Region, allowing us to optimize synergies across all facets of our operations – from marketing to sales to communications, while at the same time maximizing the talents of our 600+ employees. Nestlé has been pioneering different segments and leading innovations throughout the Caribbean, achieving international standards with local talent.”

Nestlé has been a household name in Jamaica for over 75 years, and has long been committed to expanding its operation in Jamaica. The company broke ground at the 94 acre Industrial park in Ferry Pen in June 2016 and relocated from their Knutsford Boulevard offices in July 2017. Nestlé Jamaica Limited opened its offices at 1 South Street, Ferry Pen facility with a 6,800 square meter facility comprising state- of-the-art Corporate Office space and Distribution Centre.
In 2019, the Nestlé Jamaica Health and Wellness Foundation (NHW Foundation) was formed with a mission to shape the landscape of Jamaica by sharing and building nutrition knowledge with our consumers, employees and business partners. 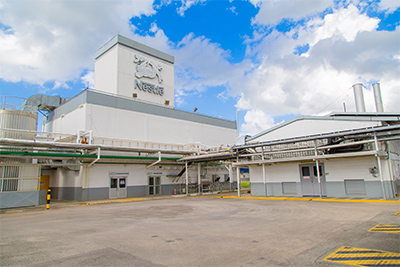 Woven into the history of Trinidad and Tobago, Nestlé has stood with T&T since World War I, from the establishment of our operations in 1914 to the commissioning our Valsayn Factory by our first Prime Minister, Dr. Eric Williams in 1962. A proud part of Trinidad and Tobago for 105 years, Nestlé T&T located in Valsayn has become a known landmark situated at the intersection of Trinidad’s two major highways. The compound includes the Corporate Office, Distribution Centre, and Factory that produces iconic local brands such as Orchard and Nestle Choc-Nut as well as international brands such as Milo and Carnation.